...was designed to aid the development of the minor-league infielders in the Cleveland Indians organization.
I wanted them to understand the scope of an infielder's responsibilities.
​Every infielder, and every staff member, received a copy.

Scheduling what I wanted to get accomplished with my infielders each week during spring training took planning and preparation. I varied each days work to eliminate any possible boredom that might develop.  Having them properly conditioned to handle the grind of the regular season was one of my priorities. This I accomplished by increasing the intensity of my workouts as the week progressed.

​ This manual will give you an idea of what a good infield program should include.
​Maybe it can add something positive to yours. 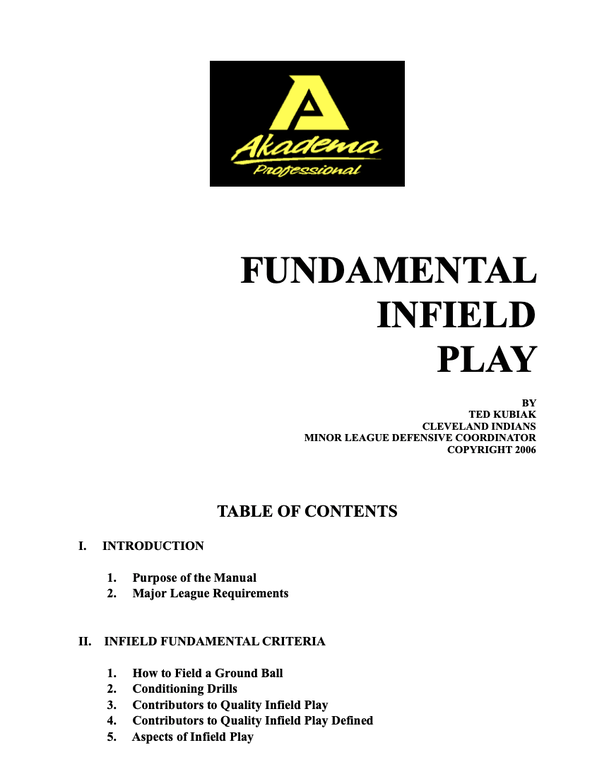 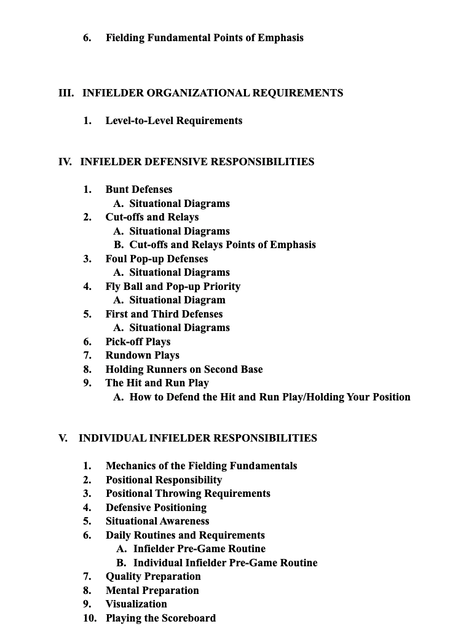 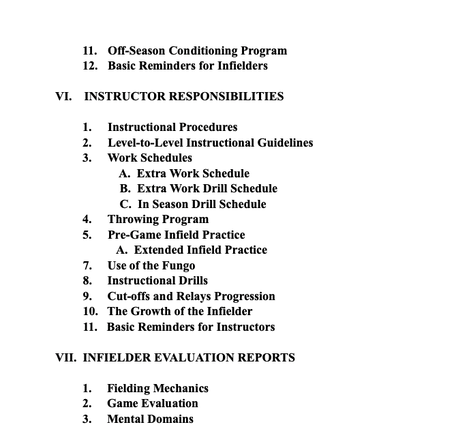 ​
There is nothing I enjoy on a baseball field more than watching great infield play, and there are few things I enjoy more than teaching others how to do it correctly.  I personally have benefited from Ted Kubiak’s insights into infield play and team fundamentals as I have had the privilege of coaching beside him. I am now a better coach. Any one who tries to help others become better infielders will benefit from Ted’s insights.
TRAVIS FRYMAN
13 YEAR MAJOR-LEAGUE VETERAN
5X AMERICAN LEAGUE ALL-STAR.


After a successful career as a player, Ted continued to help the Oakland and Cleveland organizations as a minor-league manager and instructor teaching all phases of the game and helping young players reach the major-leagues. Not only a great baseball man, he wanted each individual to become a better person.
Tom Giordano
Sixty-eight Year Scout
​Advisor to Executives in Six Major-League Organizations


For twenty years, I have watched Ted Kubiak use his knowledge of infield play and the game of baseball to help develop players in the Cleveland Indians organization.  He has been an outstanding teacher in all aspects of the game, particularly in the area of infield play.  His infield manual, "Fundamental Infield Play", takes you through the basics of what it takes to become a good infielder. It includes in-depth explanations of every aspect of infield play.  Ted’s eye for detail and ability to teach are the results of having spent his life playing, coaching, managing and instructing baseball and infield play at the highest levels.  Ted’s knowledge of the game is matched only by his love for it. I know you will learn from and enjoy his manual as much as I have.
John Goryl
6 Year Major-League Manager and Coach
60 Year Instructor for the Cleveland Indians

​
Ted’s instruction is the only coaching that I have truly admired and improved with.  His approach to good defense is not just physical but mental.  Almost like a culture or an attitude.  I can attribute my all-time major-league third baseman fielding percentage record to Ted.  I have the greatest respect and Ted remains a good friend today.  Even though I went to other teams, he was still receptive to working with me.
Kevin Kouzmanoff
7 Year Major-League Infielder


This manual is an extensive list of critical issues affecting infield play.
It can be a model for setting up a either a new program of instruction or improving one you now have.

It includes a shortened version (9,000 words) of my "HOW TO FIELD A GROUND BALL" document.

"FUNDAMENTAL INFIELD PLAY"
​
​​...hover over the document below and click on "SHOP."

Input the required information, and a digital copy of the manual will be sent to your em​ail address.
​Be sure to save the download.
​PayPal will protect your purchase.
​
$995.00
Thank you for visiting my site.
​Email me with any questions you may have at...pugskiddo@gmail.com.