​I am pleased to have published two books.

​The first publication is... 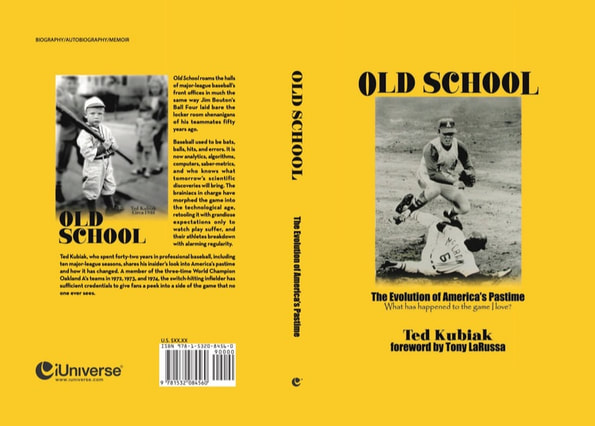 "Old School" exposes the emotions that dictated a life within a life. It lays bare the ambivalence that dominated both for far too long while freely exposing the emotional underpinnings that controlled everything. It is a psychological self-analysis of the unraveling of the insecurities that affected the pursuit of a passion.

"You will relive my six year minor-league career, its ups and downs, its difficulties, and all the pressures of pursuing a major league career."

Not the typical sports biography, "Old School" also chronicles the change in America's pastime brought about by an intelligence that seems convoluted in its application. No one could foresee the outcome of the scholarly reincarnation that has descended on the game, and negatively transformed its core.

"I will take you into the front office of a major-league organization for a look at what the computer, sabermetrics, and analytics have done to drastically change America's pastime."

Baseball used to be bats, balls, hits, and errors. It is now analytics, algorithms, computers, and sabermetrics, and who knows what tomorrow's scientific discoveries will bring. The brainiacs in charge have morphed the game into the technological age, retooling it with grandiose expectations only to watch play suffer, and their athletes breakdown with alarming regularity.

From "OLD SCHOOL" by Ted Kubiak

The timing and substance of the attention that "Old School" gives the present analytical system that has redefined America’s pastime is so thought provoking it should be placed in conversations with the most important baseball books ever written. This high praise is well earned. Its urgency to the state the game is in today is not exaggerated, and neither are Ted’s credentials to comment on the difference between the two philosophies.

FROM THE FOREWORD BY
TONY LA RUSSA    HALL OF FAME MANAGER

​When the idea of writing a book about me was presented, I was surprised and flattered. What I did not want it to be was an expose' revealing the shenanigans and locker room antics of my teammates, or a daily diary of my time in the major leagues. I wanted it to be instructional and informative. As time passed and circumstances changed, an idea developed, and I started the project myself. It was not easy, but it was one of the best things I've ever done.

Once begun, the entanglement of grammatical and syntactic possibilities, the misuse of tenses, punctuation, and clichés, and too many words gratuitously penned that stretched sentences into lengthy and boring paragraphs defined much of my early efforts.

​My work was often monosyllabic, dull, and non-descriptive, then rambling and incoherent, often childish, very often confusing, and sometimes illogical and incomprehensible. And that was just my opinion! I battled a wonderful editor who put up with me, and endured my many obstinate rebukes of his suggestions, but he taught me how to write. Thank you for your patience, Jim.

​"Ted Kubiak’s book, "Old School", is a narrative that tracks his life-long affair with baseball from childhood, through his minor- and major-league years, and finally his decades-long career in player development. Forty-plus years in the game are qualifications enough for him to give the reader a revealing view of baseball’s most critical current issue—the transformation of the game from its traditional, or old school methodologies, to one dominated by statistical analyses and sabermetric findings."

"Old School" has two major themes that are seamlessly connected throughout the book by their relevance to baseball as a game and an industry. One is intensely professional and thought provoking, the other highly personal with insights that are entertaining and revealing. In either, Ted does not hesitate to express himself. His candidness, especially when it is self-directed, is appreciated and trust inspiring. His candid style of writing earns the reader's trust. It helps them appreciate the personal parts of his story, and the seriousness of the analytical issue now facing baseball's decision makers." ​

FROM THE FOREWORD BY
TONY LA RUSSA    HALL OF FAME MANAGER

Visit either Amazon, Ebay, or Barnes and Noble on the internet

My second publication is a pocket version of my document entitled...

"HOW TO FIELD A GROUND BALL" 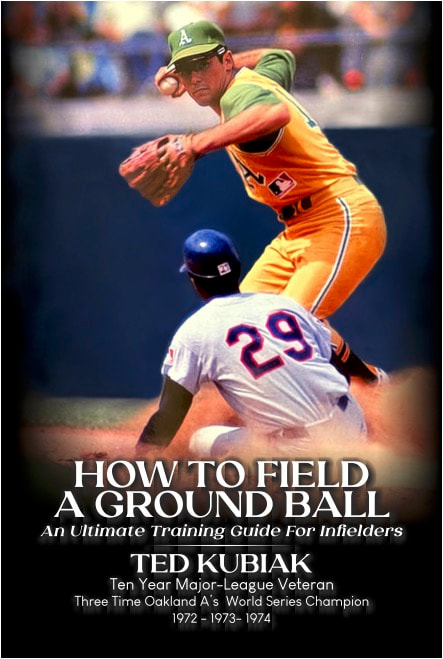 With the same instructive analysis as contained in my 18,000 word downloadable document, this is a 5" x 8", 52 page booklet that you can carry with you for handy reference.
​

I will send you a free copy if you download

"HOW TO FIELD A GROUND BALL"

from either the Player's, Parent's, or Coach's page